I have some big news today.

Well, today we’re introducing vdsql, a plugin for VisiData that you can connect directly to your live databases — pretty much any database that speaks SQL!

You use VisiData in almost exactly the same way as before — the same commands, the same keyboard shortcuts — only instead of loading files into local memory, vdsql translates your commands into SQL queries, and relays those to your database. Those queries run server-side, and the results are sent back to VisiData.

Yes, this means you can explore your live databases — leveraging VisiData’s powerful transformations and aggregations — without writing a line of SQL yourself.

Since vdsql’s queries run server-side, you can work with much larger data sets — like your entire data warehouse.

There’s no longer any need to first export an extract for local analysis; just have vdsql to talk directly to your database, like so:

Once connected to your database, explore tables using the normal VisiData interface. When you’re done, you can save out the resulting queries as SQL (and eventually as Substrait or Python).

To run vdsql, you’ll first need to install Python 3.8 and pip (the Python package manager). vdsql also depends on recent versions of VisiData and Ibis, but these will be installed automatically when you install vdsql.

The short answer is:

Learn a bit more about how to install vdsql here. Note that only the SQLite and Clickhouse backends are installed by default; to connect to any of the other backends listed above, you’ll need to install the Ibis dependencies for each one separately, using (e.g. for MySQL):

Once installed, you can use vdsql instead of vd whenever you want to query a database directly, instead of loading the database tables into memory first (as vd does with flat files). Remember, vdsql to use a SQL connection; vd for in-memory processing.

Find all the details in the CHANGELOG.

Why are we introducing vdsql (vdsql) as a separate tool from VisiData (vd)? Why not integrate this new, fancy, whiz-bang SQL connectivity directly into VisiData?

The short answer is: This is all very, very new, and we want to make sure we do it right.

So, for now, vdsql is its own tool, separate from VisiData, and you have to install vdsql separately. But, that said, vdsql is also a VisiData plugin, so, once vdsql is installed, you can use it from within VisiData core — up to you.

As we continue to develop vdsql, it may become part of the VisiData core, at some point.

…where file_or_url is any connection string supported by ibis.connect() or any of the filetypes and options that VisiData itself supports. 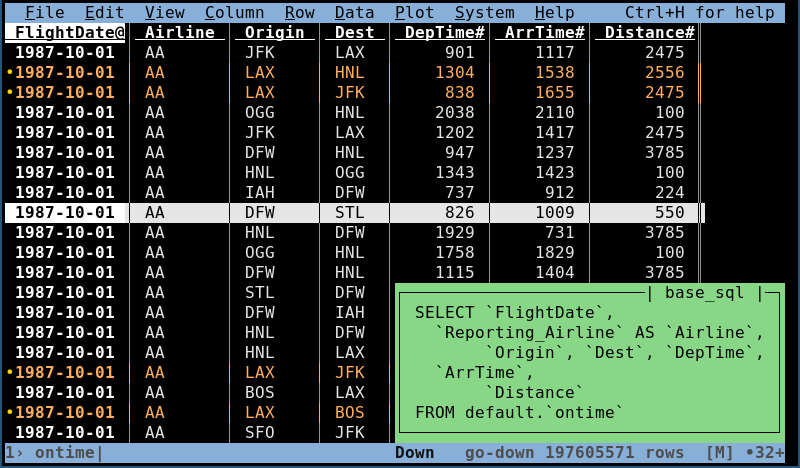 vdsql uses the VisiData sidebar (introduced in v2.9) to show the SQL query for the current view.

In this way you can compose a SQL expression using VisiData commands, open the SQL sidebar, and save the resulting query to a file (or copy it into your system clipboard buffer).

What’s next for you?

First and foremost: We want to know what you want! Submit a feature request on GitHub.

That said, here’s what we think are some important next steps:

A special thanks to Phillip Cloud and Anja Kefala for their contributions to the project thus far!

← Estimates of current and future usage