This case study was originally a video, that was published on 2018-04-01. The video was designed and recorded by Saul Pwanson with help from Tara Hoch.

It was transcribed by E on 2019-12-11 and then updated and converted into a blog post by Anja Boskovic.

This walkthrough will use VisiData to take a paragraph of donation information from a website (beginners.re), and then get it into a form that can be easily summed.

In the process, the following commands/features will be covered:

Since the donations are all in different currencies, Saul made a plugin called USD. He uses the plugin's USD() function at the final step in the case study. USD() takes a number and a currency code or currency symbol, and converts it into US dollars based on the current day's currency rates. If you want to follow along with the final step of the tutorial, before you launch your VisiData session you will need to add the USD() code to your ~/.visidatarc or install it as a plugin. Then its functions will be added to your session's scope. This is completely optional, and only comes to play at the end.

Since the video's creation, fixer.io has also added a user api key requirement. To take advantage of the usd plugin, you will also need to create an account, grab an api key, and then set options.fixer_key in your .visidatarc in your $HOME directory.

Saul: I came across a book called "Reverse Engineering for Beginners," written by Dennis Yurichev. It seems like it's a pretty good book; he's got a bunch information about it, and he also lists the donors who have supported him. I actually really appreciate his transparency here, that he will share all this information on his website. It made me curious as to how much money had been donated to him overall. 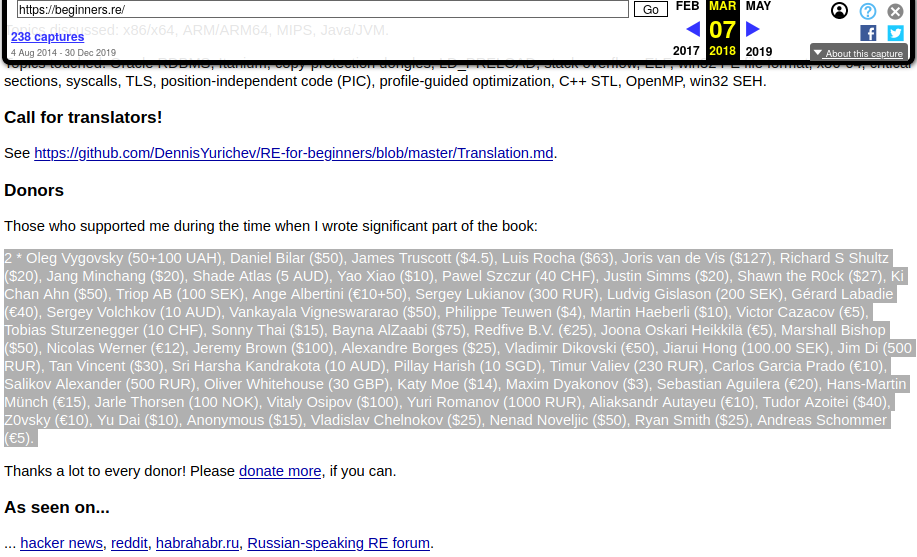 So you'll notice that this information here is in a single line. It's actually not that bad, but it's not in a form that we could easily do something with. So we're going to use VisiData to pick it apart, and try to do a sum of how much money was donated to him.

First we are going to cut and paste this text into our terminal window, and pipe into VisiData directly.

Now VisiData has that as one of its rows. 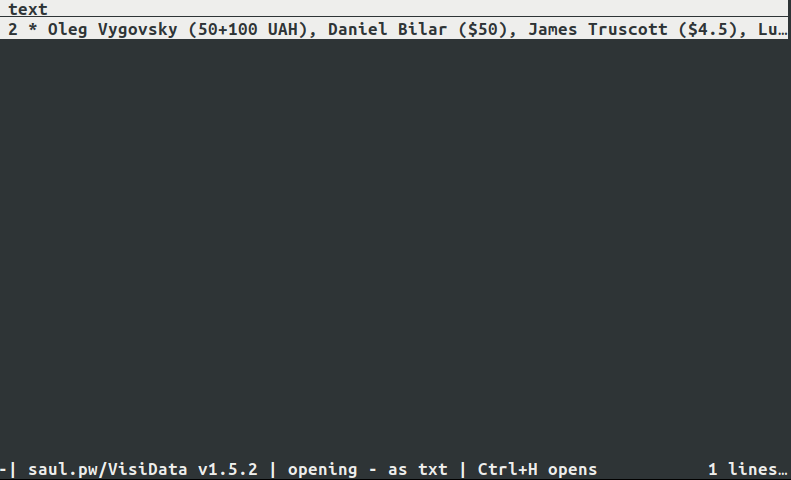 If we reduce this column to just a few characters here, you can see it's actually quite a long field. If you wanted to view the field and see all the contents of it, you can edit it (with e), and you can scroll across the whole thing. 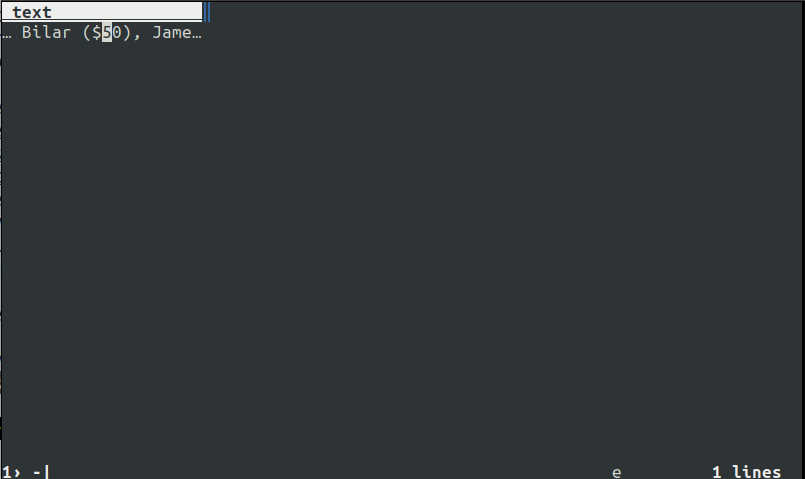 You can also press Ctrl+O to open any input line in your own editor: in this case it's vim, in the terminal. With this, you can see the entire contents. You can also make edits and save them off; they'll be reflected back in the cell. For now, we are just going to quit out of this and cancel the edit. 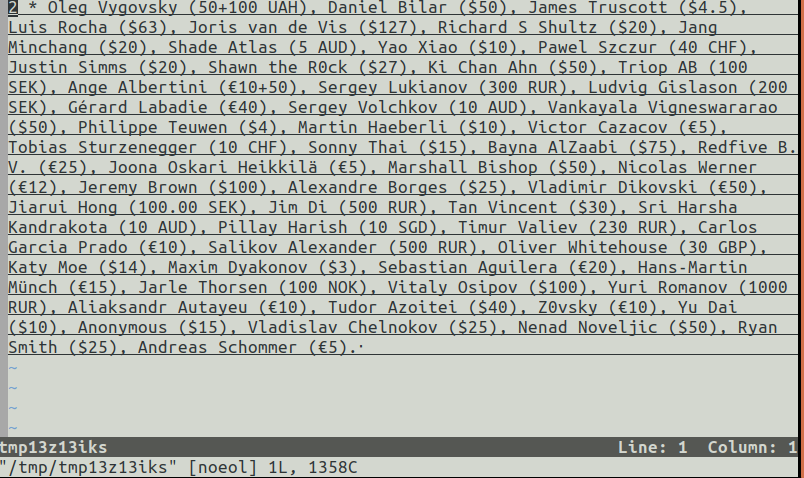 What we want to do, is split up that single line according to the individual donations. Each donation is separated by a comma, so we're going to use the split command (:). The split command allows you to split the text in any column into two or more columns, based on a provided regex. In this case, the split regex is just a comma (,). That will create columns for every individual donation. 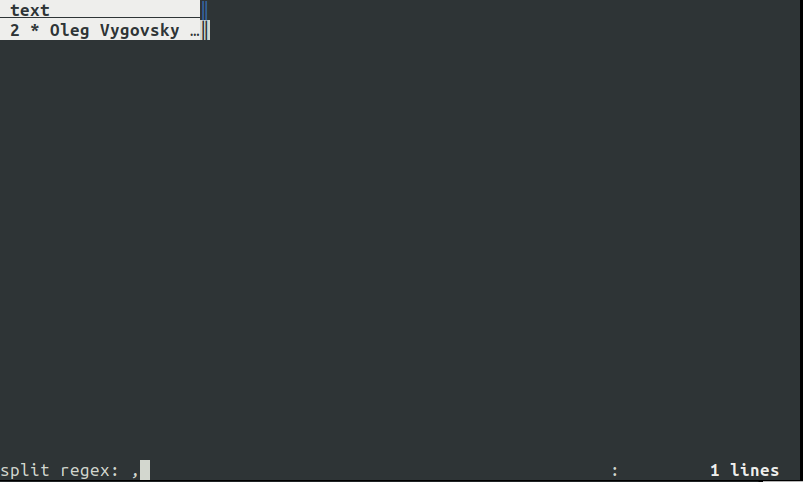 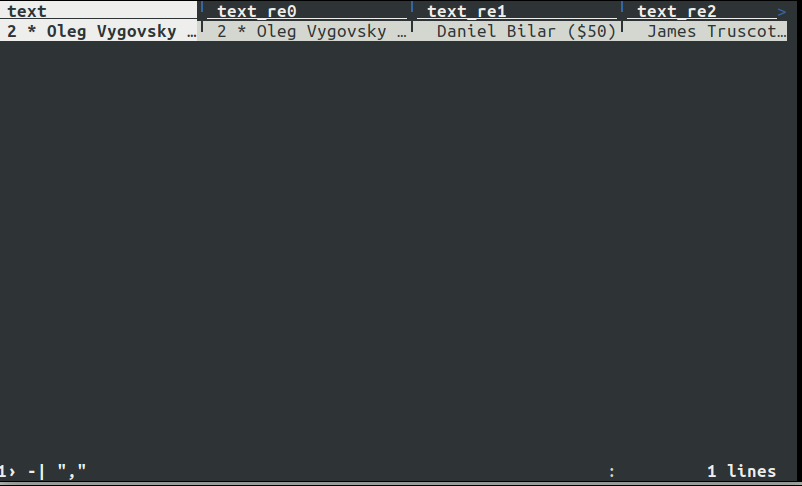 Now, we're going to hide this first column (-), and now we've got every donation in its own cell, which is a great start. This is a horizontal form of the data, but we want the data to be in a vertical form, because that's what VisiData expects. VisiData does statistical operations within columns.

So we're going to use a command in VisiData called 'melt': it's like an un-pivot. It takes data from a horizontal form and swings it down into a vertical form. Now you can see the column names on the left, and the cell values on the right. Now we're ready to go. 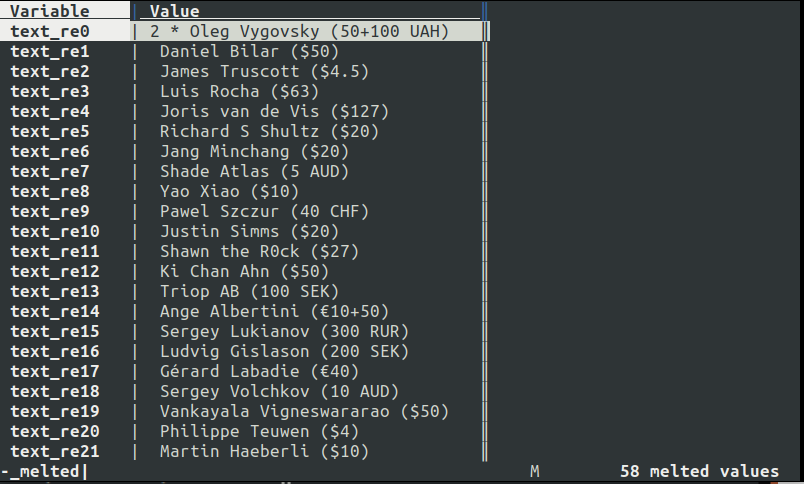 We can move our cursor to the Value column, and we're going to use another command. The ; key extracts part of a column according to regex. We're going to pull out the donation amount from within the parentheses, by constructing a regex. This is the standard regex for extract everything from inside the parentheses: \((.*)\). The inner set of parentheses (.*) is the capture group. Everything included in the capture group is going to be pulled into a new column. 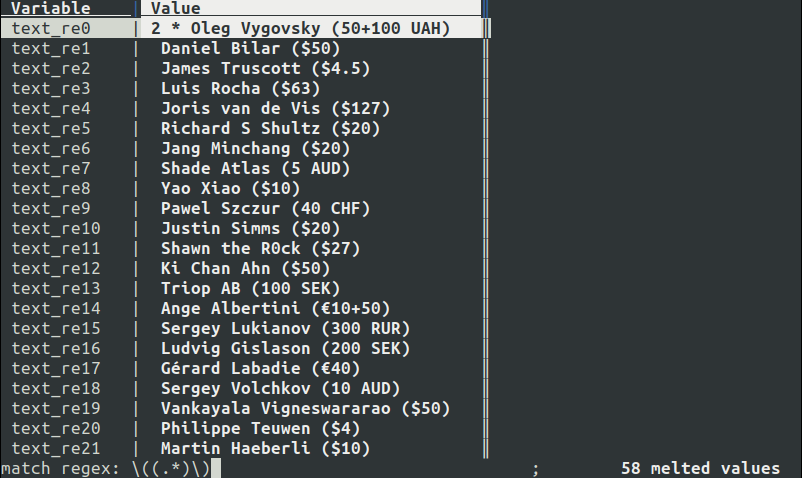 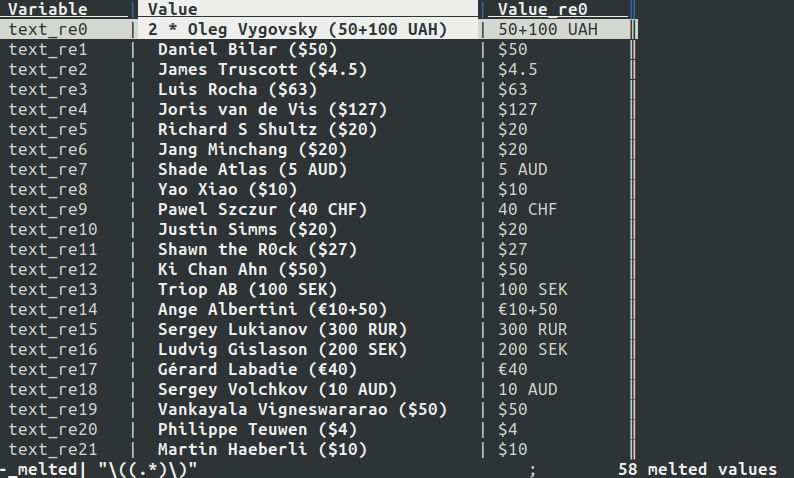 If we wanted to, we could just sum up this set of numbers. It wouldn't be very meaningful, because they're all in different currency units, but we could do it.

There is a type, assigned to keystroke $, which I call a currency type. It's really just a dirty float: it takes the initial non-numeric characters and converst them into a float. The trailing non-numeric characters are stripped off. The cells that have a symbol in the middle can't converted, so they will show up as errors. We will ignore those for now. And so now we can approach this as just a column of numbers. 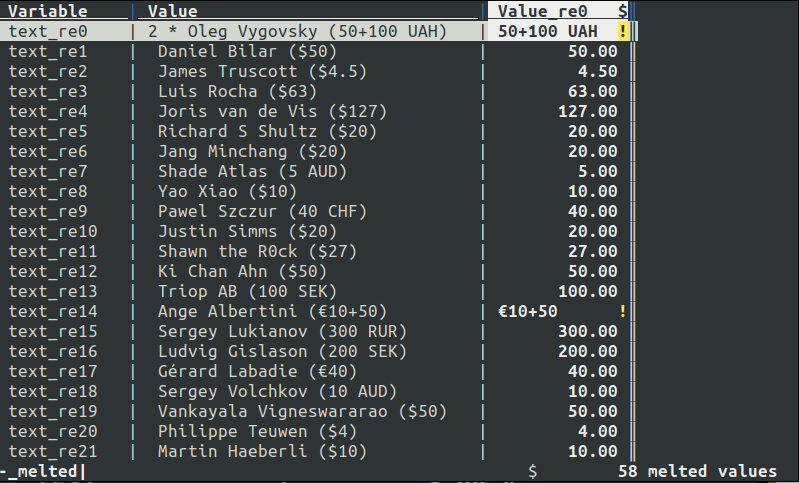 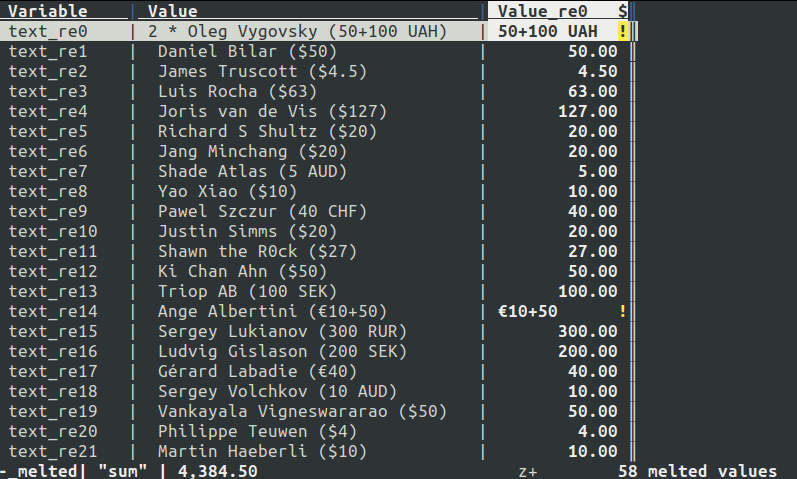 To use it, let's convert our currencies back to strings. This will involve using the ~ command. It was so-chosen because it looks like a string to me. Pressing it will type the current column back to a string, like it originally was. 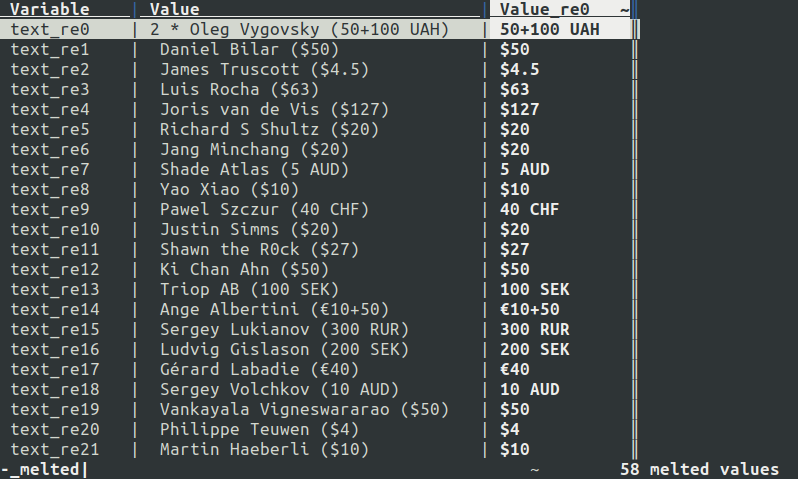 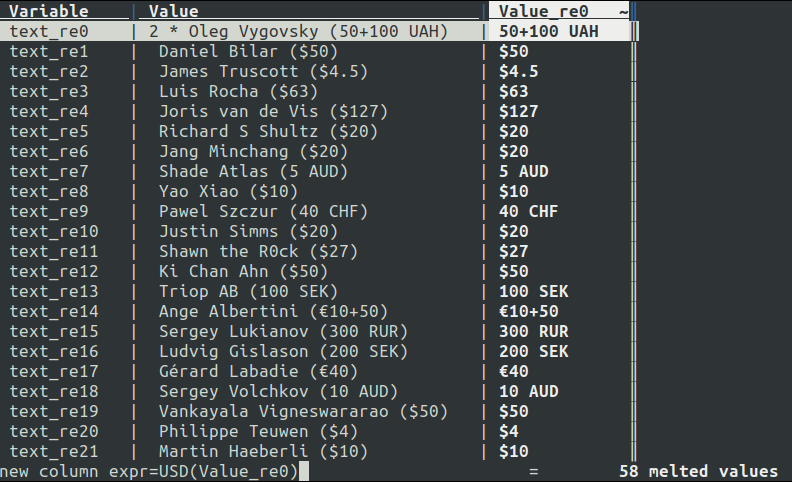 I'm then going to convert this USD output into a float type. Now we can see that, for instance, this €50 is actually ~$55 in US money. Others that were already in US money just remain the same. 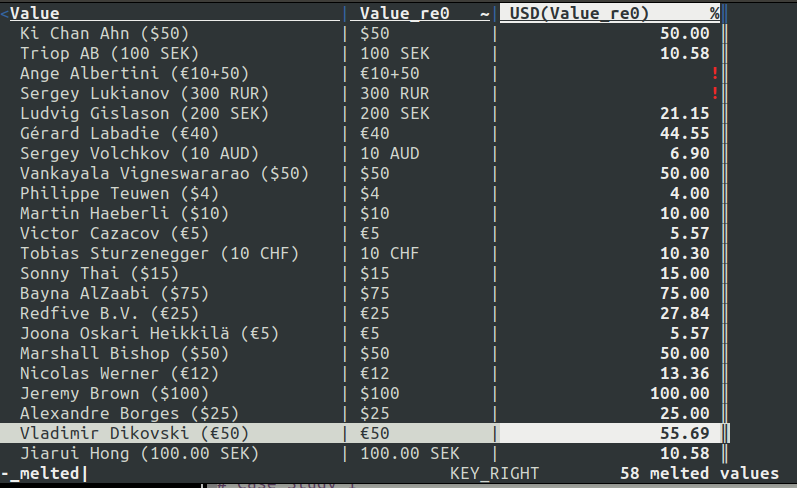 Now, we can do the same z+ sum as we did before, and see the value in US dollars as of today's rates. That is about $1,431 worth of value: that's the total donations he got from people for his book. It's not quite the full total, because we're missing the ones with errors and such. We could do some more things to make that better, but this is a rough general calculation. 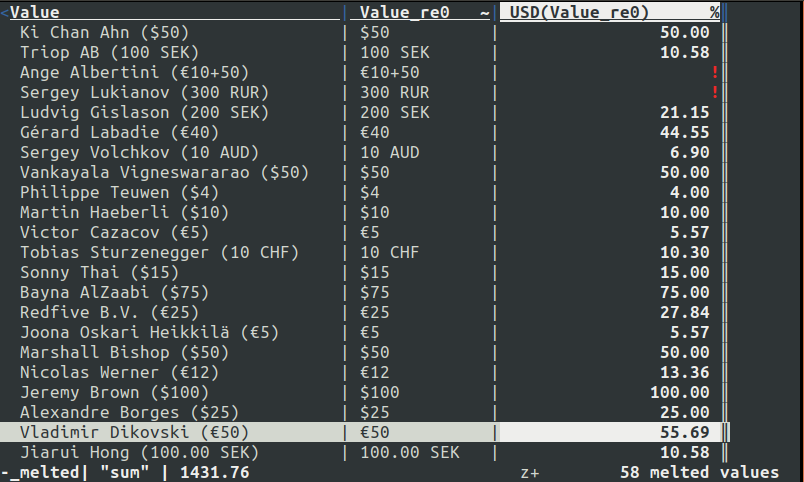 Thanks very much for using VisiData, and I will see you next time!

← Exploratory Data Analysis Made Easy At The Command Line - Episode 230